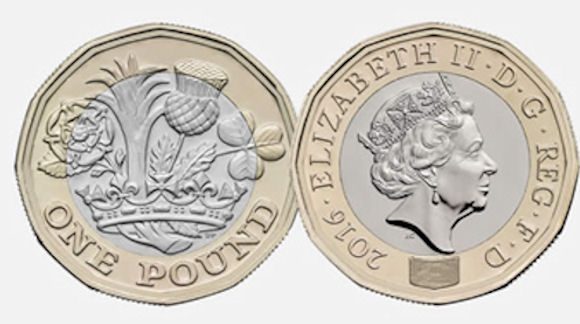 The excitement of the new £5 note seems to have eased off now and I think by now nearly everyone will have seen the new £5 note (even if like me you haven’t had one yourself yet.)

The circular pound coin has been in circulation now for over 30 years but The Royal Mint who produce coins have confirmed that the UK will now have a new £1 coin which will enter circulation early next year and it has drastically changed from its predecessor. It has been said that the main reason for having a new £1 coin is because the circular coin is too easy to counterfeit and it is estimated that 1 in every 30 pound coins are fake.

The new pound coin is going to be a 12 sided coin (dodecagon). It will feature a rose, a leek, a thistle and a shamrock this is because they are symbols associated with the four home nations (England, Wales, Scotland and Northern Ireland). The old £1 coin is made of nickel and brass however the new coin will now be similar to the £2 coin and will have two different metals; the outside will be nickel-brass, and the inside nickel-plated solid alloy. It will also be slightly larger than the old coin which is 22.5mm and its replacement will be 23.43mm from point to point.

The new £1 is more secure like the £5 polymer note as it is harder to forge due to its dodecagon shape and the fact it is made up of two different metals. The government have said that it is “the most secure coin the in world” as non-rounded coins are harder to copy. The nickel plating on the coin has be designed to be hard for forgers to remove and to work with cutting edge but unfortunately-named security technology iSIS. The Royal Mint has kept silent about the precise details, the iSIS plated coins can include secret electromagnetic signatures.

The new £1 coin is set to enter circulation in March 2017 and this is when the Royal Mint will begin to withdraw the old £1 coins out of circulation until they disappear completely. By autumn you will be unable to use the old coin in shops, vending machines or be receiving any in your change. If at this point you still have any of the £1 coins you will be able to deposit them at most high street banks and the Post office. (The Royal Mint does advise that you check with your bank first).

But don’t worry the new pound coin has been tested on old vending machines and it works so you can still buy you Coca Cola or Skittles (other drinks and confectionery items are available).